Yesterday, after finishing a lovely dinner at Redstone with my mom, Jeremy and I were driving home. I got a text from a friend who asked if we could stop by her house for a minute to pick something up. We diverted from our travels home to pick up the belated wedding gift.

We turned off of 394 on to Louisiana Avenue. We drove straight and happened upon a flock of what appeared to be police officers. I immediately screamed that someone must have gotten shot. No worse, gang fight. Worse yet, cat stuck in a tree.

Nope, none of those. Clearly day #1 of cop training.

Today's lesson: directing traffic. We pulled into the intersection with the stop light turned off and noticed more clearly that there were 12 year old police officers, okay well maybe not 12, but they were not a day over 14, I swear, they were young. Two 'police officers' were in the street while approximately 15 stood on the sidelines, watching the action.

We pull up. An approximately 12 year old female officer looks at us and points to the right. The 15 year old male officer looks the other way and points for that side of traffic to go the same way she did. Had the cars obeyed their commands it would have been a head on collision. The pseudo officers then look at each other and start to argue while traffic piles up. They stop fighting and resume their traffic cop duties. Sortof.

As you see in this photo below - the officers continued to resemble to scarecrow as they pointed traffic in opposite directions. Jeremy and I then almost caused our own collision as we wet our pants laughing at the situation. 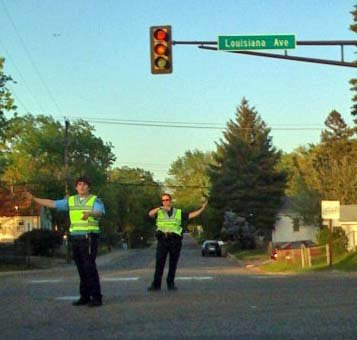 And that is today's story of the day. And we should all now hold hands and recite a prayer that these officers failed traffic school and will now be working at McDonalds. If not, think twice before you follow the next traffic cop's direction!
Posted by Kara Frank at 9:51 AM

Yeah, that's scary. Here's hoping it really was day 1 and by the time they're done, they'll not look like the two-headed monster from sesame street.

I love that you thought their was a gang shooting at 394 and Louisiana... instead of the more likely guess that their was a riot of people trying to get sushi at Benihana.

that is one of the best stories i have ever heard!!! i often ask the grocery baggers if it is past their bedtime (ok, not to their faces but in my head)