Now please note: Jeremy and I have signed up for tennis lessons with Debra and Coop. Chaos will likely ensue.

#1.
Random likely-Russian guy who told Jeremy and I our kids would be bad athletes. In so many words. 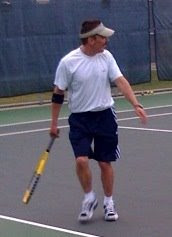 #2.
Kara Leigh Frank. Considered the best athlete in her family. Second best would be Grandmother who is afraid of water. This is quite the acclaimed spot. Tennis class attendees....be afraid...you have the best Weinblatt/Goldman family athlete in the house. 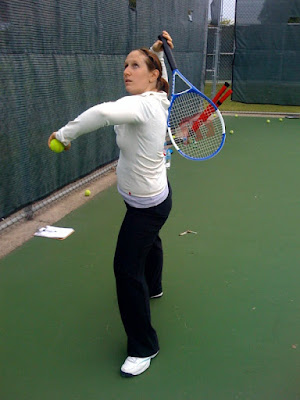 #3.
Stephanie Cooper. Coop lived in California for a while, so that must win her some points on the tennis ability scale, right? Everyone in California plays tennis. And runs on the beach in their bikinis. 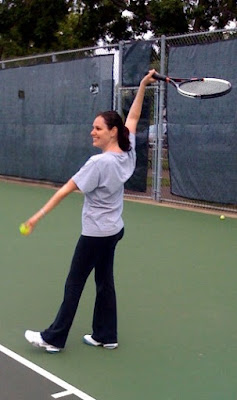 #4.
Jeremy Scott Frank. Considered the worst athlete in his family. Recall his brother's best man speech. Referencing the times when he would throw baseballs against the garage door because his younger brother would rather play inside, in "a controlled and safe environment" as he would say.

#5.
Debra Fiterman
Champion walker, technology aficionado, television extraordinaire. Might be more interested in making sure the teacher scores the games correctly than the actual game of tennis. 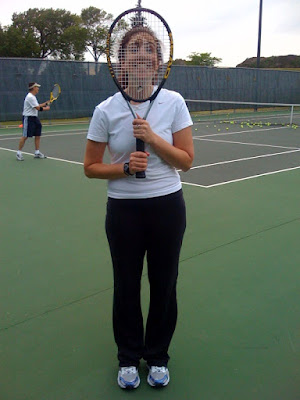 So there's the lineup. What we lack in ability we make up for in spunk! Lessons are Tuesdays from 6-8 at Brookview if you would like to stop by for some serious entertainment. Look forward to updates as our skills progress each and every Tuesday through June. It's just so hard to be so talented at so many things.
Posted by Kara Frank at 11:52 AM

I'd like to think of the group like the A-Team of tennis...none of your shots hit their intended target. ;-)

Have fun, play hard out there!

Um...in my defense, as nice as our instructor was, he was not very good at keeping score. I mean, what's the point of playing if you can't win? What did you say? This is community ed tennis that no one cares about? Oops.