I watched the Oscar's. I really like to see who wins best silent foreign film presented in 3D. I am gleeful when I hear who wins best costume design for a short film. Or whatever those awards are.

But the truth is....I like to see the dresses. I really just watch the Barbara Walter's special and then move on with life. I do my usual TV on in the background while folding laundry, cooking, cleaning, playing with the dog thing.

Which leads me to the worst fashion disaster of the night... 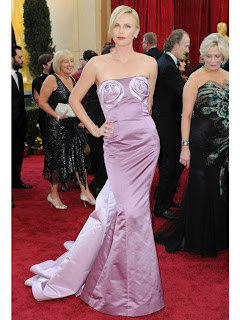 Did nobody look at this dress on her before she left the house? I mean there are the glaringly obvious giant roses on her ta-tas which are just beyond bizarre. Yea, we know they're there, no need to stick some giant flowers on them. And then as you look further down, you notice that her dress is horribly wrinkled and puckered.

Now I am not a girl who irons. In fact if it were a life and death competition and I would have to iron to save my life, I would likely not make it. It is just not a skill that I possess. Therefore, I take things to the cleaner.

And now, if I were to go to the Oscar's (which is entirely possible), I think I would find a little time to get my dress to the cleaners. And if not, I would even take on the job myself. Yes, for the Oscar's, I would iron.

Second fashion faux pas of the week. The jumpsuit. 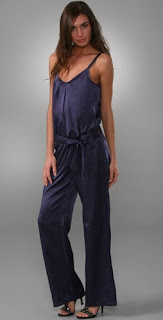 I am a loyal Shop-it-to-me follower and am typically thoroughly pleased with the items they think I would like. However, when I received my daily shop it to me last week, and opened it to find a jumpsuit, I almost hit unsubscribe. (key word, almost)

Shop it to me, neither me, nor anyone I know, should be caught dead wearing the aforementioned jumpsuit. You should be ashamed.

Friends, if I find you wearing a jumpsuit, I might have to stage an intervention. A jumpsuit intervention. This is simply unacceptable.

And I must pose the obvious question, what happens when you have to pee?
Posted by Kara Frank at 3:25 PM

I'm glad I'm not the only one who thought that dress was a disaster! The first thought that went through my head when I saw it was "Are you kidding me? That is ridiculous!"

I'm glad I'm not the only one who thought that dress was a disaster! The first thought that went through my head when I saw it was "Are you kidding me? That is ridiculous!"

i dont usually pay much attention to fashion, but your writing on it is so funny! it actually gets a girl like me who is so out of it in the fashion world to pay attention! congrats on the house!

I actually like the first dress, but definitely NOT the jumpsuit!

hey, even I watch these awards just to check out the outfits. I agree with what you said about that ugly dress.

The worst thing about jumpsuits is that no matter how hard you may try, it is inevitable that you will dunk the thing in the toilet. Not a Glamour "Do".

Your blog has been recommended to us as a interviewee's favorite blog!

We would like to do an interview with you about your blog for
Blog Interviewer. We'd
like to give you the opportunity to
give us some insight on the "person behind the blog."

It would just take a few minutes of your time. The interview form can
be submitted online here Submit your
interview.