Last week, just 3 short weeks before we close on the sale of our condo, our disposal went on the fritz, and then died. We tried resetting it, we tried flipping the circuit breaker, we tried leaving it alone for a while and coming back to it...nothing worked. The little sucker died.

I tried to find ways in which we could get a new one in for free, (i.e. pilfer it from our new house)...that option failed. Miserably. So, we bought a new one and are eagerly awaiting my friend's husband who will install it. THANK YOU BILLY!!

In the meantime, the sink likes to do this oh-so-attractive spit up thing. Out of nowhere it turns into an infant child and begins to spew from the depths of sink-dom. It's pretty. Real pretty.

I mentioned this to my grandpa a few weeks ago and he said, "Well did you stick a broom down there and turn it around?"
"Why no, I had not stuck my broom in the sink."
"Do that, stick the broom in the sink" he replies. 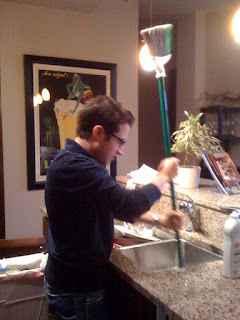 In other news, Jeremy has decided to leave his job at Target to join the team members of Roto Rooter. He has found his passion.

Turns out it works! Stops the incessant sink spit up. Temporarily.

Billy Please hurry. It's kind of offensive when I walk by the sink and it decides to spit at me.
Posted by Kara Frank at 9:00 AM

Jer looks like a knight slaying an evil beast. :-)