I apologize for my total lack of blogging lately, life has been a bit chaotic. Clearly life was chaotic when we were about to get married, but I managed to find time to write. Maybe it's been a lack of inspiration, no, that's not it, inspiration abounds....

I could have told you about the massive lump I had removed from my shoulder. I have disgusting photos from the surgeon. Want to see? Vote! If I get enough comments, I'll post it. Debra thinks I should...it's more cool than gross. But maybe that's just me. It's called a lipoma, or a fatty tumor, that grows for unknown reasons. haha - I know you all wanted to know about that! They say they can grow from previous injuries, and that is a likely cause for me as I tend to lots of athletic things, poorly, and harm myself.

I could have told you about the past week at work - chaos mixed with chaos. On Wednesday night I was charged with sewing two checkered flags for my boss, who had to give a speech the next day for an event we were hosting. He thought the flags would aid him in his speech, and thus, I spent the evening sewing two flags, by hand, because I live in a shoebox and my sewing machine is packed up who the hell knows where. 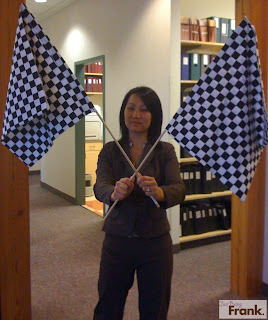 Yep, those are the flags I made. I'm a pretty excellent flag maker.
I could tell you about everything I have learned about low voltage in homes, and security systems. Yea, no, I probably would not have bothered telling you that because it was even boring to write. Poor Jeremy, I think if he hears the words 'low voltage' again he might implode.
That's about all I could have shared, and look, I just shared it all! woo - hoo.   I am pretty darn excited for the weekend. It's been a long week.
So let me know if you want to see the pictures of the lump. I swear it's cool. Come on...don't ya wanna see it!?
Posted by Kara Frank at 9:08 AM

If you want, I can give you a bone fragment taken out of a horse's leg.
It's really gross and it's in a test tube.

You let me know

Nice flags! Did they work as intended?

I wanna see the lump! And I'd like to teach you how to rotate pictures... :-)