This past weekend was, by far, one of the strangest weekends in remembered history.

Saturday began like a typical day, got up, went to the gym, and then dropped Jeremy off at our friends, Debra and Alex's condo about 5 blocks away from the shoebox. You see, Saturday was Alex's bachelor party and they had a day filled with "Manly" activities planned, shooting guns, eating, drinking, playing pool...manly stuff. They had rented a van to drive for the day, so they could all remain in one vehicle. Okay, fine.

After dropping him off, I went home, got ready for the day, and then drove to my parents house. My family owns an apartment complex in Fairbult Minnesota, where the average age of the residents is 95. And I don't just mean the average age of the apartment dwellers, though they too, are quite old, but I honestly believe there is not a resident in town under the age of 55. It's quite odd. Our whole family went up there for the afternoon for the annual Thanksgiving, "Dinner" (which was at noon, which qualifies it as lunch, but apparently old people get confused and call lunch...dinner.)

We ate the Thanksgiving, "Dinner" with the residents. Appreciated the fine decor that the residents enjoy, including paintings of wolves, floral chairs, and valances filled with newspaper. Ya know, typical old people decor.

After "Dinner" we drove home from the parallel universe that was Fairbult, Minnesota, population: 1,000, nobody under the age of 55.

I then went to buy Jeremy a car. (Long and unnecessary story) Debra came with me to pick up the car, as I thought it would be a quick trip, the price was already negotiated, so we would sign some paperwork, learn how to fill the car with gas, and then leave. Not so much.
I filled out this sheet of paper
wait 20 minutes
fill out that survey
wait 10 minutes
go meet with the finance guy (whose role still seems largely unnecessary)
wait 30 minutes
The whole process took almost 2 hours.

And if you are reading this, and you are a salesperson of any type, I recommend you avoid the following sentence which was said in front of my by the car salesman: "John, I need to talk to you about this one in the other room"  Oh good, I've got real confidence in this deal, now that you two are going to go talk about me in the other room. Maybe have a code phrase? Like, "Hey John, can you help me find the car's manual in the other room?" or "Hey John, come see these really cool tires over here".

Anyways, we finally go the car and went on our way. We did a bit of shopping, and then I got a call from the dealer. She had forgotten to give me the temporary window sticker for the car, since it is new, and did not yet have plates. So...the car saleswoman drove out to Lululemon to bring me the temporary license plate for the car. Yes, she walked into the dressing room, found us, trying on yoga clothes, and gave me the sticker for the car. Totally normal.

And now, on to the final stages of the weirdest day in remembered history. Debra and I then proceeded home to hang out at her place with our respective dogs. They were going to play, and we would order dinner and watch a movie. Well we did just that, minus the dinner. Our dinner took almost 2 hours to arrive from the restaurant, located just 1/2 mile away from the condo. After yelling at the driver, we go the food for free, but we were still baffled by the length of service.

Until we received a call from Jeremy.
"Kara, it is freezing rain outside, I am on my way back to Debra's with Mike (Debra's dad), Harvey (Debra's Father-in-law to be) and Todd (Debra's brother-in-law). The roads are really bad, we are driving slow, we need to get off the highway"

I passed the message along to Debra, assuming, per usual, that Jeremy was being a little dramatic. You see - turbulence in a plane - means the plane is going down, snow on the roads - means we are going to wind up in an embankment, and lightening - means we will likely be electrocuted shortly.

However, when they were not home in 30 minutes, I called him back.
"Kara, the roads are still really bad, they're horrible, we are barely moving, I think we are all staying over at Debra's tonight"
I hung up quickly, as I was barely able to contain my laughter. It was not snowing outside, and we could not even see rain. I thought this was some big Bachelor party joke that they had concocted. Wouldn't it be hilarious if they all slept over. Debra and I joked about it for a while.

An hour and a half later they called to say they were on their way in to the building, walking from several blocks away, and would be sleeping over. In order to get into the building, the 4 of them literally attached themselves to eachother making a human chain, and yanked one another up the hill, and into the condo building. Jeremy coaching them along the way, telling them to, "Stay low, get down". Quite the soldier that Jeremy. 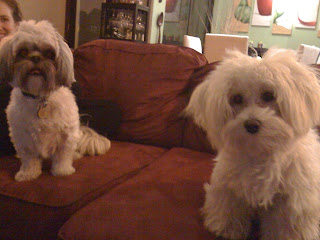 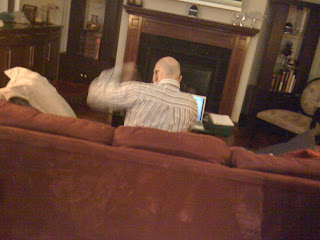 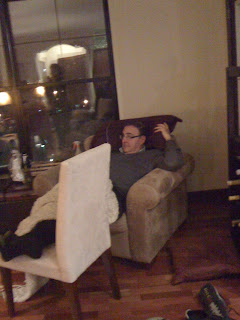 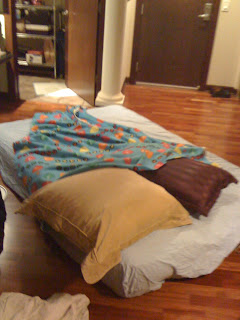 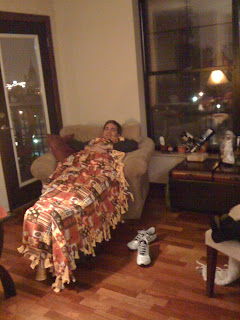 (not pictured, Alex (the fiance), and Dwight (the friend)..who were also at the sleepover)

And then...
Jeremy, crawling out of the building the next day... 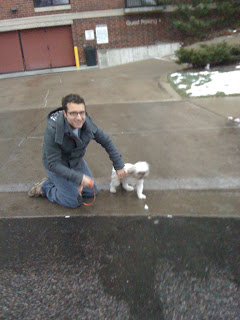 Yes, it was that bad. And yes, the weekend was that strange.
Posted by Kara Frank at 10:24 AM

I wish I could have taken video of my car ride home. Things we saw:

Our driver park the car in the middle of the highway, skate to the side of the road, and pee...before traffic had moved.

Stupid people hanging on to their car doors and skating alongside their cars.

A Smart Car that was driving sideways.

My best man going from vertical to horizontal before fully exiting the car.

That picture of Daisy and Punky says it all. Look of confusion and happiness...good times people