Well...we did it! This past weekend we successfully moved out of our shoebox and into our new home!

The weekend started with Thanksgiving at my aunt's house. We do most of the traditional stuff, minus the things we don't like (read: green bean casserole and gravy. Both are foods which my Grandfather has not-so-fondly named, "snot")

We did a bit of Black Friday shopping, scoring a BluRay player, a GPS for Jeremy, DVD player for our gym. And then I had this idiotic idea to brave the shopping mall. Dumb idea. It took me 30 minutes to find a parking space. I was so overwhelmed within 20 minutes that I had to flee the mall in frustration in about 30 seconds. 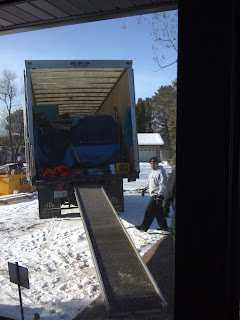 The movers started at the shoebox, then picked up more belongings stored at both my parents house, and finally, my aunt's house - and then on to our new house! 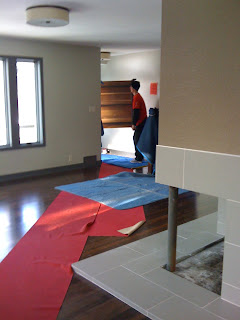 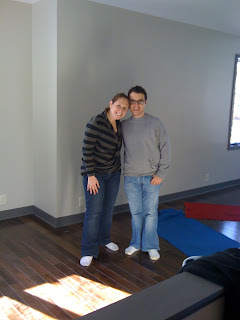 The day was totally uneventful, and went off without a hitch. Which lead me to begin thinking...what is wrong. Why did this all work out so smoothly? There were no strange occurrences. No bizarre mover stories. The day had seemed just too boring and unremarkable.
Until Sunday evening. We had visitors in and out of the house, arriving to see our new digs that they had heard so much about. Our friends Dave and Amy were in town, so they were over, touring, and we were waiting for our other friends, Adam and Sally to arrive to see the house as well.


I had just finished telling Dave and Amy why there was a big wooden box in our back yard - the reason being that the house was still on temporary power service until our power lines were dug by the power company on Wednesday.
"So you see...we have about 1/6 of the power typically used to run an average house right now, so we need to be careful of what we do" I said.
..and then we hear the fateful noise that sounded something like a spaceship landing.
And the lights went out.

To make a long story short, our builder had called and asked us to turn on some space heaters in the basement to warm it up for the flooring guys that were coming on Monday. They needed the concrete floors to warm a bit so they could install the flooring. We followed her instructions, but she...and we....forgot that we had very little power, and thus that fateful act would shut us down.

And so, we welcomed our friends into our dark house. We told them that we were going Au Naturale, we don't need power, we are totally rustic. Sure.

And so we promptly left and had to get a ride to my parents house (since our cars were stuck inside the garage...no power...no garage door). About 4 hours later we got ahold of the electrician and Jeremy, my dad and I managed to get the power back on. Big Win. Power...pretty critical.

Though in the hours of no power, I complained to Jeremy, "What am I supposed to do, I have to go to work tomorrow, and I can't sleep without lights."

Yes Kara, yes you can sleep without lights. In fact lights are not recommended for sleep.

So minus the power outage, the move was spot on perfect. Now who wants to come over and unpack boxes?!

But I did realize,  that would be a good way to conserve energy, if households use too much power - zap them and shut them down!
Posted by Kara Frank at 9:45 AM

You forgot about that pesky missing phone signal.

Love the house, can't wait to see it all put together and Punky-fied.

Wow...I must have missed out on the power outage fun by like 3 minutes! It would not have been a Frank move without a funny story. Now, the house is officially a Frank house.

I have been anxiously awaiting this post for days! I am so excited for you guys and can't wait to see more pics - post soon please!! xoxox NatalieLem