Where there's a will, there's a way. That's pretty much my life's motto. When I get it in my head that I want to do something, I always find a way. And I wanted my new puppy a week early, so I found a way.

My best friend Stacy told Jeremy, "I wouldn't ask my husband to drive to Green Bay to get a dog, and Kara finds a complete stranger and convinces him to pick up her dog".

I had a friend over for dinner on Thursday night and discussed my perils. This pup was just sitting, and waiting for us, and he needed a ride back to Minneapolis, because I couldn't wait another week. Lo and behold, a few hours later, she sent me a text message that her boyfriend had a friend who was in Green Bay for work, and would be heading back to the cities the next day. So....She sent me his contact information and I called him! I asked if he wouldn't mind just picking up my little dog.

"He's tiny, and adorable....shouldn't be a burden at all" I told him.
And so he did. Nice guy Dave, whose wife happened to be a veterinarian, picked up my pooch in Appleton, Wisconsin and brought him home to me!!!!

Sometimes you just have to ask! Determination - I have plenty of that. 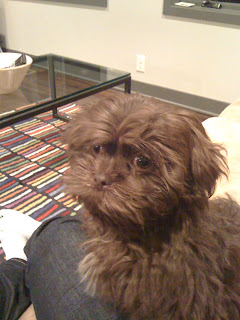 He is hilarious. And loves to be held. A total sweetheart. And is driving his sister, Punky, nuts.

But look at that face! How could I have possibly waited!? 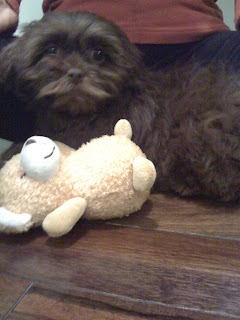 Welcome to the Frank house Stanley!

As our vetrinarian likes to say: "I hope that when I die, I come back as a dog in a Jewish home"
Posted by Kara Frank at 9:19 AM