After we moved into our new house, there was a big decision we had to make. It was a fundamental decision that would shape almost every day of our lives after that point. Unless we decided to make a change, but for a good long while, it was pretty permanent.

The decision - our fitness activities. Earth shattering? To me, yes.

Options included the status quo, which was to continue going to to Corepower Yoga (for me), a spin studio in Minneapolis (no longer convenient), and use the treadmill and vintage 1992 Tunturi bike we inherited from my parents... 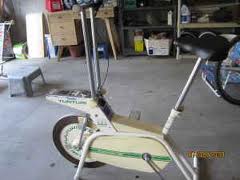 Option B- purchase a new piece of equipment to accompany our treadmill instead of the aforementioned bike which resides in every home in America.

Option C - join a gym. Within option C, there are a variety of choices.

Option D - screw it and eat cookies on the couch instead.

After looking at every piece of exercise equipment in town, trying out every gym imaginable and creating numerous spreadsheets comparing the cost of equipment and classes, to the cost of monthly dues to find our greatest value, we finally made a decision.

We joined the nicest gym, closest to our house. It gives us a good balance of pretty surroundings, excellent classes, state of the art equipment and nice people. But, acclimating to this new gym has proven to be a bit of a challenge.

The first week we decided to try out a spin class. Our membership advisor suggested a class, and after joking with him that I hoped I would not find people wearing biking jerseys and spandex.... 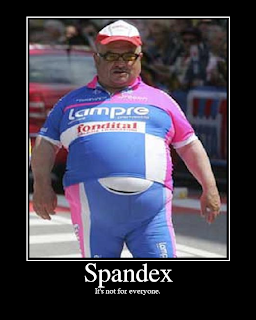 He assured me that this was not that type of class! Great! We were on our way to a great workout! After spending about 15 minutes in the locker room, trying to figure out the key card system, while still looking cool and pretending I was not the dorky new kid on the block, we went into class.

We arrive, and Jeremy quickly notes that people seem to have snacks with them. And not just like a granola bar, which would be odd in itself, but the vast majority of the people in this class have egg, nuts and cheese on their bikes. Yes, eggs and nuts where water typically resides on a spin bike.

I note that we are the only ones in the room who are NOT wearing spandex jerseys. Is this some kind of joke? We decide to stay, assuming it is just a day for crazy people to go to spin class.

And then the instructor turns on the TV's. Turns on the Tour de France on TV. And so it goes. He informs us that we are here to go on a 2 hour ride and he hopes we remembered snacks for this endurance ride. Jeremy and I whip our heads around to one another and gulp.

We spend the next hour riding along, watching the Tour de France, as the "Spin Instructor" teaches us about cycling races, and who wears what jersey, and how the teammates help each other, how to change a tire on a bike.......it went on and on. After exactly 59 minutes and 59 seconds, we both look at each other, without a word we nod our heads and we run like hell for the door.

Woops. Guess that was the wrong class for us.  But we still felt a little bit cool because we use spin shoes. Who would have thought we would stick out because we were not toting our own eggs?
Posted by Kara Frank at 2:01 PM

I think this story just made my head spin around. That's some weird stuff.

You lost me at eating cookies on the couch.

You should come to 501SP1N-- you would love it! And you can try as many classes as you would like free for a week.