Sometime mid-December, we had a group of friends over for dinner. Our friend Samantha told us that her 30th birthday was approaching in March. She said that she really wanted to run a 5K for her birthday. Somewhat of a Birthday goal and feel-good activity. There is a St. Patrick's day 5K in Minneapolis, called the 100% Irish 5K. Runners dress up in costume, green beer and shamrock cookies await the finishers...plus, I totally look Irish. This is the race for me. (Really I just wanted to do it for the shamrock cookie)

I am always up for an athletic activity (minus a marathon, which I have no interest in doing, so don't invite me to one. Unless you want me to cheer. I am an excellent cheerer.). And so I, very willingly offered that Jeremy and I would join her for her 30th Birthday 5K on March 12th.

Turns out March is not a warm month.

And so, on the morning of March 12th, I awoke, got out of bed, took the dogs outside to go to the bathroom, and promptly ran back inside screaming something along the lines of "IT IS A$% FREAKING COLD OUT THERE, LIKE HE*& I'M RUNNING IN THIS WEATHER".

However, besides my obvious problem of over committing myself to activities, I also have an insane guilty conscience and absolutely require myself to do things to which I have committed.

And so, we layer long underwear, running tights, tank top, tee shirt, long sleeve tee shirt, long sleeve jacket, hat, gloves and head out the door for the race. The entire car ride, I proceed to complain about the weather, explain how my lungs are allergic to the cold and convince Jeremy that I have poor circulation and so it feels much colder to me, than it must to him.

Finally, about 2 minutes before we arrive at the lake, he turns to me and say, "I'm so glad to hear you have such a positive attitude about this race. It's really refreshing."

Okay fine. He's right. I will put on my positive attitude hat.

We park the car, and run like the dickens to the starting line because well, we are freezing out tootsies off. Our friends arrive, and I really tried to keep my positive attitude hat on, but it must have blown off in the 20 MPH winds, and I turn to Samantha, and say, "Why couldn't' you have been born in August?"

Whoops. I was supposed to be positive.

And so we ran. And it was actually more fun than anticipated. There was a group of guy running with pants, no shirts, and their chests painted green. Unfortunately I couldn't take a picture because my fingers were frozen together. But we did manage to get a picture of the two of us, with the reason I ran the race. The shamrock cookie. 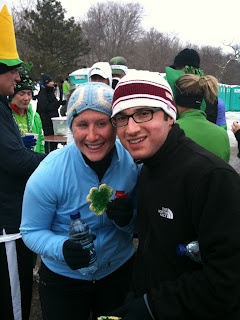 Just a reminder. It is still quite cold in March, in Minnesota. Very cold.
Posted by Kara Frank at 9:31 AM