Who stole my deck?

Last week Jeremy was traveling to India all week for work. I was home alone. I am terrible at being alone. I required babysitters at age 16 because I hated to be alone. I still hate being alone. I am edgy. Everything is a threat when you are alone. Trees become creepy people. Rabbits in the yard become coyotes waiting to attack my dogs. It's bad.

Last Thursday night I had a meeting for an organization in which I volunteer. My boss also volunteers for this organization and is on this committee with me. After the meeting she mentioned that she hadn't seen our house since we finished construction. Knowing that I hate to be alone, and love visitors, I eagerly invited her to stop over after the meeting.

She came in, we walked around, I gave her a tour, and then gestured towards the deck, "This is the deck...it's very, uh, deck-like"
"Hmm..." She responds
"What happened to your deck?" She inquires
"What are you talking about??" I ask, in an annoyed voice.

And then, I look out the deck door to see the following: 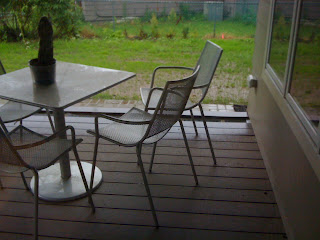 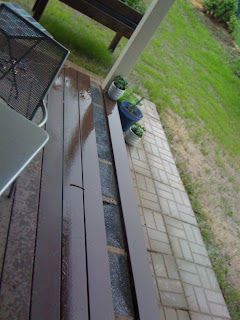 So I stood there, with my boss looking on, quizzically, wondering what to do next. And by wondering, I mean running around screaming, like a chicken with my head cut off, ranting that someone had stolen my deck.

I called my Dad. He had been to our house that day, but had not stolen our deck.
I sent a text message to our builder, to ask if he had for some reason stolen our deck. Nope. He said he had not been there in months.
Finally, I sent a text message to our project manager for the builder to ask if she had maybe been to our house and stole our deck.
All the while screaming and ranting as though my house was under attack.

Bingo. She had stopped over to perform a well inspection with the city. Failed to tell her boss. Failed to tell the Franks. Accidentally broke a section of the deck while removing it to inspect said well. Brought the section with her to match and replace. And thus caused Kara to have a heart attack.

Thankfully she responded quickly, or my next call was to the police. And I'm not sure how they would have reacted to a crazy lady calling and claiming that vandals had stolen 1 section of her deck.
Posted by Kara Frank at 4:49 PM

Holy crap, you guys just can't catch a break with this house. Hope things get smoother going forward 'cause this is ridiculous.

Let me guess you thought that the Brighton tire slashed moved to Minnesota and move on to decks??