Well ya know, being the good citizens of Golden Valley that we are, we felt it would just be un-neighborly to miss the summer Ice Cream social. Yea, that's kindof a lie, we went for the free ice cream.

The promotions touted a band. I expected something along these lines... 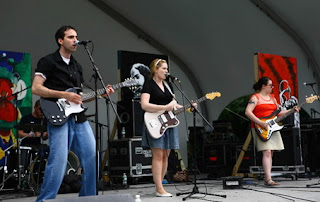 It was much more along these lines... 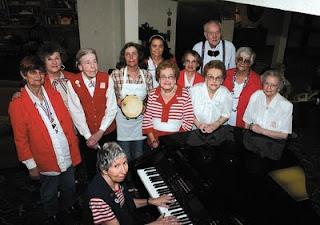 And that is no exaggeration. Except that there were more of them. Like 35 senior citizens playing in this band. It was honestly pretty darn cute. But ya know, not quite what I expected when I heard 'band'.

We went with some friends, who are also Golden Valley residents. Our friend Sam wore dark black dress pants and a dress shirt. Apparently Sam missed the memo that it is 150+ degrees in Minnesota this week. He swears he assumed it would be inside, but I say....Ice Cream Social inside? Come on Sam, clearly you need to attend more neighborhood functions. We party outside. 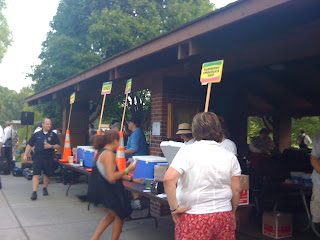 It was a lovely evening, Senior Citizen band, 150+ degree temperature, and the slowest ice cream cone scooper of all time and all. (seriously, this man made a turtle look fast. And when it is 150+ degrees, Kara is hot, and waiting in line for ice cream, you don't want to make her wait. I'm just sayin'. This Golden Valley volunteer ice cream scooper should probably lose his un-paid, volunteer job).

It was a pretty rockin' night. We live on the wild side.

That is absurd.
Posted by Kara Frank at 8:55 AM