The Great Minnesota Get Together

Yep, it's that time, the Minnesota State Fair. Adored by Minnesotans, and even many from surrounding states who clamor for the bizarre fried foods, the barns full of farm animals, the political booths, and the unfortunate outfits worn by Minnesotans. (that happens to be my favorite reason to attend the fair).

Now I have to start by saying that my birthday is August 30th. Which, every single year, for my entire life, and well, before I was born too, falls during the Minnesota State Fair. So every single year, friends and/or family suggest...hey...here's a great idea...let's celebrate your birthday by going to the State Fair!

Wow. Creative idea. Haven't done that for the past 28 years. Totally fresh idea that has never, ever been thought of before.

And so, every year, we go to the fair, to "Celebrate Kara's birthday". Though it doesn't involve cake, ice cream, singing, or really anything that I enjoy except for cows. The cows are pretty awesome, and make the State Fair worthwhile.

However, this year, I actually enjoyed the fair. My husband, who knows me quite well, has learned how to make the State Fair, "Kara-friendly".
Step #1: Start out with a snack
Step #2: Share foods. Kara likes to share foods.
Step #3: Find the healthy State Fair foods to mix with the terrible ones. (there is a peach outside of the horticulture building that is seriously life changing. "Washington State Sweet Dream Peach ($3) | Midtown Global Market Produce Exchange: No mere fruit, this ripe, juicy, richly flavored peach is a flavor bomb with a wholesome background. The antidote to all that is fried and meaty, the peach sounds dull, but, as its name suggests, eats like a dream."
Step #4: Visit some farm animals, but do not eat their likeness before or after visiting their barn.
Step #5: Do not go when insanely busy or hot
Step #6: Keep Kara away from massive hoards of smelly people.
Step #7: Do not stay long. 2-3 hours is plenty for the Kara.
And so we followed steps 1-7 and had a successful visit to the State Fair. Though I refused to call it a celebration of my birth. Out of principle.

We also rode on the Ye Ol Mill Ride, which was touted as a romantic boat ride, but is actually a pitch black, horribly frightening ride through a cave of some sort. I literally lost my mind screaming. Turns out there's really no way off the ride. I tried. Didn't work. Sorry to the people before, and after me, who were hoping for a romantic journey. I may or may not have been screaming the entire time. And finally, text messages that would only be sent while visting the Great Minnesota Get Together, also known as the Minnesota State Fair... 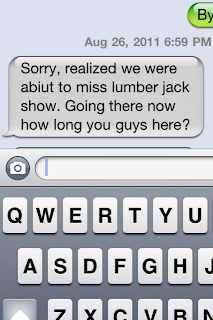 Have a great time at the fair!
Posted by Kara Frank at 1:38 PM