Today is my birthday. In case you missed the memo. It's a pretty big day. Except, I have to admit, this is the first year that I feel really old. It's the 10th anniversary of my 18th birthday. And 18 doesn't seem so long ago.

This year's celebrations included a day of fun this past Saturday, planned by Jeremy. We started the day with a Yoga Sculpt class, which was a real treat because Jeremy came along. He's not a big yoga guy. They say chaturanga dandasana and he just sits down, cross legged on his mat, feeling defeated because he doesn't know what to do. Or they'll say, Warrior II to the left, and he's facing the right. But for my birthday....he joined me at Yoga. Big stuff.

Then...we proceeded on to activity #2 which is also not Jeremy's favorite, but which Kara loves...horseback riding.

We drove out to the middle of nowhere (also known as somewhere near Stacy and Billy's house) and took a trail ride on horseback.
As we were signing in, the woman said to us, "Just check this box to say that you decline the helmet rental"
"Decline??" Jeremy responds
"I'm not declining, I want a helmet" he continues
The woman looks at him, quizzically, unsure if he is kidding, or if he really wants a helmet. There is an awkward silence and then she realizes that he's not kidding. This guy really wants his helmet. And so, she fits him for his helmet. While he is not looking, I eagerly check the "decline helmet" box, and off we go.
(Truth be told, if it was socially acceptable, Jeremy would wear a helmet at all times. One cannot be too careful, you know.) 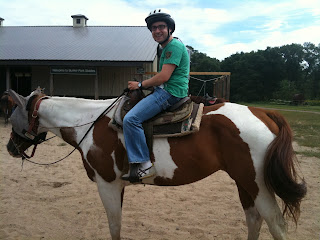 Jeremy, on his horse, with his helmet
It was a lovely ride. At a pace of about 6 MPH, through a park. But regardless, I remain shocked and honored that the guy got on a horse and rode the thing for me. A real statement of dedication.
The day was ended by a lovely dinner at a new restaurant. I think it was the promise of a nice dinner that got him through activities #1 and #2. He left the helmet back at the ranch for the dinner. But I think he was a little sad to see it go.
Good husband, this guy. Helmet and all.
Posted by Kara Frank at 4:03 PM