Shortly after we adopted spirited little Punky, we realized that we were in for quite a ride. This was not just going to be an experience in dog ownership, but also a serious lesson in parenting.

We quickly learned that Jeremy was the 'Primary Needs Parent' and I was the 'Affection Parent'.

Now that dog #2 has entered the picture, we have learned more parenting lessons including how to divide one's time, share the attention, and break up fights.

And now, the most important lesson for "parents" to learn...
Sometimes, you just need to pick your battles. 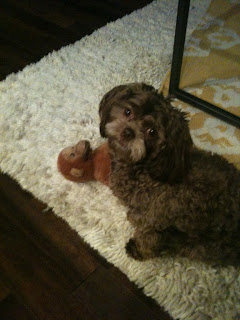 Stanley Benjamin likes to take his toys outside with him when it's time to go potty.  We think it is disgusting. Stanley would run outside with his stuffed monkey in his mouth, and, as soon as he was outside, I would do the "quick grab and throw", and toss the stuffed monkey back inside. Little spoiled Stanley would then suction himself to the glass door, standing on the stoop, entire body - at one with the glass, screaming for his monkey. He would lose all interest in the potty break, instead using the time to scream and flail, pining for the stuffed monkey.

Until one day I arrived home from work in a less than stellar mood. As usual, I took them out of their doggy area, and opened the door to let them out. Stan ran outside with his stuffed monkey, I reached to pick it up and throw it inside, and then blurted something along the very edited lines of:
"Fine, if you want to bring your fu*&#ng monkey outside to pee, do it. It's not my problem if it sits in the poo area. It's your stupid toy"
(I was having a hard day)
And so he set his monkey down, peed, picked up his monkey, and waited by the door to go inside. 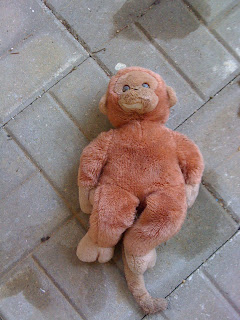 Shocked, amazed, and pretty grossed out, this lesson in parenting was solidified. Sometimes your children (dogs) want to do ridiculous things. And sometimes, you just need to let them do those ridiculous things because it achieves the ultimate goal.

And so, with that, we may someday be the parents whose child goes to school wearing a Bat Man costume with a Tutu over it, but at least they'll be at school.