We had the great pleasure of celebrating the wedding of one of my oldest and dearest friends this past weekend.
Stephanie and I met in Kindergarten.
I started a few months late in the year as I had transferred from a public school to this new school, a private school.
Stephanie and I were matched together, she was supposed to be my buddy, and help me acclimate to the new school.
She was not very pleased about this task, and let me know it.
All of the Kindergarteners had 5th grade buddies, and she had two.
When I arrived, they gave me one of her buddies so we each had one.
She did not like this.
Later in the year, we put on the annual Kindergarten circus, and I 'stole' her part in the circus.
She did not like this either.

However, despite the theft of her 5th grade buddy, an the crushing defeat of the Kindergarten circus part, we still became instant friends.
And, 23 years later, I was honored to attend her wedding in Arizona.

We flew down to Arizona a few days early as it was Christmas weekend. And we don't celebrate Christmas. So we had nothing better to do.

We rented a car. I made some joke to the car rental guy because our name had an asterisk next to it on the car rental reservation board. I asked if the star meant that we were the customer of the day, and therefore should be upgraded to a fabulous car (instead of the Nissan Altima we rented).
The guy seemed to think it was funny, though Jeremy did not, and he upgraded us to a Camaro.
And so we drove this sucker for the next 4 days.
And it made Jeremy look like he was selling something illegal on the side.
He just did not look quite right in this car. 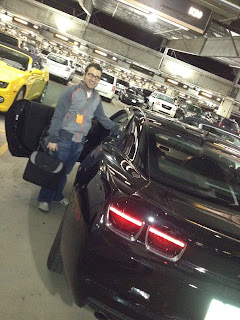 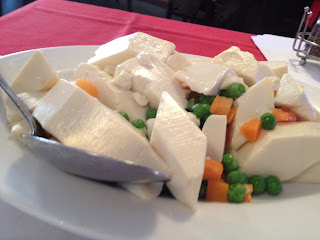 And then we proceeded to drive around aimlessly for the rest of Christmas day, desperately trying to find something to do. To no avail.

However, we did witness this distributing scene on the highway. Yes, that is a dead cow in the back of the truck. We tailed this truck for many miles trying to get a closer look. We were certain that this was a fake cow, or somehow a joke, but it appears that it was 100% real, and 100% disgusting. 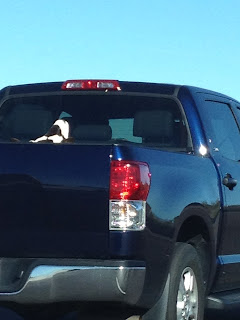 The day after Christmas we did a little shopping. And then some more driving. I love to look at neighborhoods and houses in different cities. We found ourselves driving through a beautiful neighborhood in Scottsdale, Arizona, lined with citrus trees.
Big beautiful trees laden with beautiful oranges and lemons.
And so what did I do?
Scream for Jeremy to stop the car immediately so I could jump out and grab an orange.
Law abiding Jeremy did not want me to be arrested over the theft of a citrus fruit.
Food loving Jeremy, kind-of wanted an orange. So, we drove through neighborhoods, in the aforementioned totally conspicuous vehicle, quietly doing drive by's until I could find a tree that was in the ideal position for a grab-and-go.
We found a tree, I jumped out, grabbed an orange, and then a lemon, and ran for my life. Certain I would be arrested for citrus theft.
But I was not.
We made it out alive, and free from jail.
And it was a totally delicious orange. 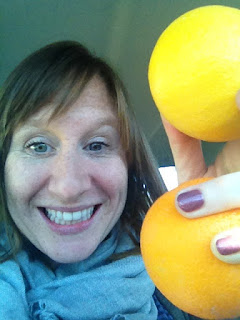 And then we went to a wedding. For a beautiful friend. Who is going to have an amazing marriage.
Yes, we look a little crazy in the following photo. 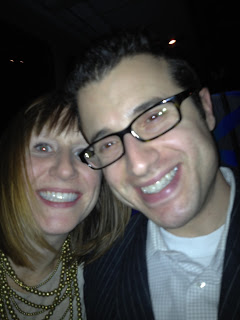 Hope you all had a wonderful Christmas!
Posted by Kara Frank at 9:09 AM