Our 1 year old is ridiculous.

The strangest dog in the world.

As mentioned previously, Stan insists on bringing a toy with him whenever he goes out to the bathroom.  (http://www.karafrank.com/2011/08/lessons-in-parenting.html)

He will not walk out the door without a toy in his mouth.

This dog will literally see me open to door to the potty area, look at me, run clear across the house to find a toy, and then run back to the door and outside.

I'm sick of fighting with him, so I let him do it.

He brought his very favorite toy outside, his keys.
He dropped them right by the door and started circling.
I was worried, he was circling right around the keys.
I started screaming, "Nooooo....don't pee on your keys...."

And he did it.
Peed right on his keys.

This is the face of the naughty dog after he peed on his keys. 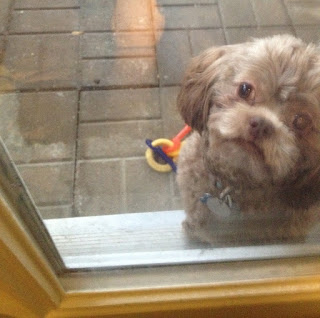 Jeremy was not home when this occured.

So I sent him a text message. "Stan peed on his keys. I put them in the dishwasher."

Let's just say I got a call from him pretty quickly after that text message that went something like this:
"HE DID WHAT? AND YOU PUT THEM, WHERE? YOU DID NOT. THAT IS DISGUSTING."

They've since been thrown away.
Posted by Kara Frank at 2:11 PM