As previously mentioned, we traveled to San Diego to visit some friends this past weekend. We had to travel separately as Jeremy was arriving from Toronto, where he had been on business.

I arrived around 8:00pm. Departed the plane. Walked through the San Diego airport in search of the baggage claim. While walking down the hallway, I heard some music. As I got closer, the music was louder and louder. A bit foggy from the plane ride, I assumed that it was just loud music, and that was over-tired.

But this would be ridiculous, right? A band, in the baggage claim? What would they sing about? Baggage on a carousel?

But oh yes, it was a real live band. On a stage. With chairs in the audience. And people dancing.

And yes, literally singing songs about baggage on the carousel.

I don't know why they had a band. The baggage carousel is one of the most annoying parts of travel, so it honestly just made me annoyed that I was trying to connect up with Jeremy, but all I could hear was a band. And when I tried explaining to Jeremy that the reason for the noise, was the band in baggage claim...he thought I had lost my mind. 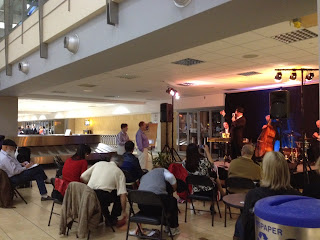 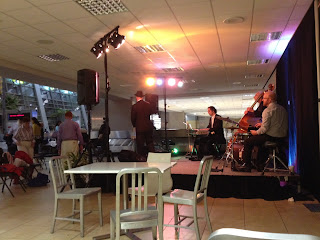 And...the people in the matching outfits...dancing to the band in the baggage claim. 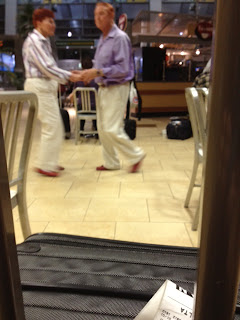 Only for you do they have bands in the San Diego airport - I have never seen that. Did you enjoy Horton Plaza?

Really? I thought maybe it was a regular thing! It was pretty hilarious.

And Horton Plaza was great...especially the dog in the mini car!

This is why I carry on.