My son, Stanley Benjamin Frank, is overweight. Approaching obese. He is 19 pounds and should weigh 17. Now, that may not sound like a lot, but it means he was charged with losing 10% of his body weight. My little Muffin Man (as I affectionately call him) has too big of a muffin top.

We were told this tragic news about 6 months ago at the vet. At just 1 year old, Mr. Stanley was already overweight. His sister, the same breed, and the same mother, has always been slightly underweight.  But my little boy, he likes to eat.

And he's so darn cute. How can you not give him what he wants?!

And so...my aunt gives him frosting from her cake... 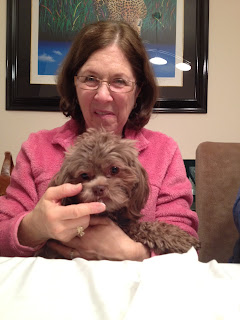 And, I give him rice (note the rice stuck all over his face, neck, ears and back) 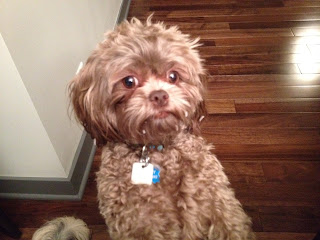 And then he grew so large that when he sits on his sister in the car, as he always does, you can no longer find her under his gigantic body. And being the amazing sister that she is, she doesn't seem to care that her brother, who is twice her size, sits on top of her in the car. Note: the small tuft of white fur underneath all of the brown. That's Punky under there. 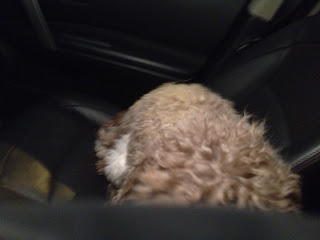 So, we went on a doggy boot camp diet in our house. We switched their food to light food. And, we started taking on him on many more walks (the beautiful weather certainly helps).

And to our complete shock...he lost 1 pound! Woo hoo!! Way to go Muffin Man! Stanley Benjamin Frank is on his way to being a slim and trim pooch. Or at least a pooch with less of a pooch.
Posted by Kara Frank at 2:10 PM