It's official, I'm getting old. This is why. I really wanted to learn how to knit. That in itself makes me feel old. I envision myself sitting in my rocker yelling at Jeremy to change the channel on the TV while I knit, and mumble and grumble about the 'darn kids these days'.

Regardless. Last night, I took a beginning knitting class with a couple of coworkers. I was beyond nervous that they would be knitting savants and I would be left in the dust. Turns out, we were pretty equally matched in our lack of skills.

We walked into the knitting store for our class. Stared at one another, afraid to look or touch the foreign objects around. Needles of all shapes and sizes. Yarn from all over the world, in a rainbow of colors.

The child in me just wanted to go and touch and poke at everything, but adult-woman-with absolutely no knitting skills-in me said FREEZE. Don't move. It felt very similar to how I feel in the men's suit department. Like this is an absolutely foreign land.

We were welcomed to the store, and the three of us continued to freeze and stare at our feet, like the knitting needles might bite. I stepped forward and said, "Uh, we don't know what to do. Do we buy these things? (I said while pointing at the needles)"
Our eyes retreated back to our feet as she guided us over to the yarn. We were told to select one of two yarn varieties as they were "easier to work with". We understood that language and finally felt a bit more comfortable.

We searched, and hemmed and hawed over colors of yarn. Why? I'm not sure. We did not know what we were going to do with said yarn. However, after about 20 minutes of weighing the pros and cons of various yarn colors, we made our selections and moved on. We were handed needles and told that they were the easiest to use. DONE. Again, key word...easiest.

We walked like soldiers in line back to the classroom. Each one of us with a great fear for what was to come. You would have thought we were learning how to perform heart surgery. We quietly sat down, clutching our new bags of supplies. Afraid to open them, for fear we might do something wrong, and resumed our comfortable gaze at our feet.

The instructor walked in and must have sensed the tension in the room, you could have cut it with a knife. Our hands were shaky, our feet, tapping on the floor with nerves.

And yes....this was all just to learn how to knit.

But we did. We learned to knit. It may have taken 6 demonstrations of where to put your thumb, but we learned to knit. Very slowly. After 2 hours, I had knit about 6 rows. And was extraordinarily proud of the coaster I had just knit.

I may have taken up a geriatric hobby, but just you wait, next thing you know, I will be knitting these... 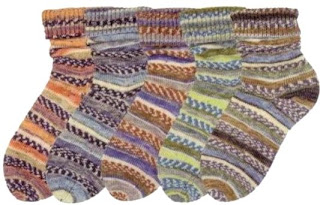