My friend Debra has a term called, "The Facebook Effect" to which she describes this way: Facebook is everyone's highlight reel.

Very few people will log into Facebook and say, "Hey, this week was really frustrating, and now I want to sit on my couch".

Instead, they fill it with pictures of parties, and fun places they visit and snippets of the happiest moments of life.  This is great, but not altogether realistic.

I share this phenomenon because it sort of feeds into my reason for not blogging lately.  While life is great, it has also been very difficult lately. And so, it felt to me like I shouldn't share those frustrations because it's not 'Facebook worthy'.  However, I shared this with a friend and she reminded me that I should probably share reality as opposed to furthering the Facebook effect.

Mollie has had a string of illnesses since her hospitalization this past winter. She has had some breathing issues, swallowing issues (and being so darn cute I want to squish her face at every moment issues). After weekly trips to the doctors office we are on to a specialist who is trying to help her...and us...breathe easier.

Here is my little monkey...after a full day of doctors appointments during which we were not allowed to feed her from 9:00am - 3:00pm....passed out asleep after finally being allowed to eat.  Milk and barium drunk. 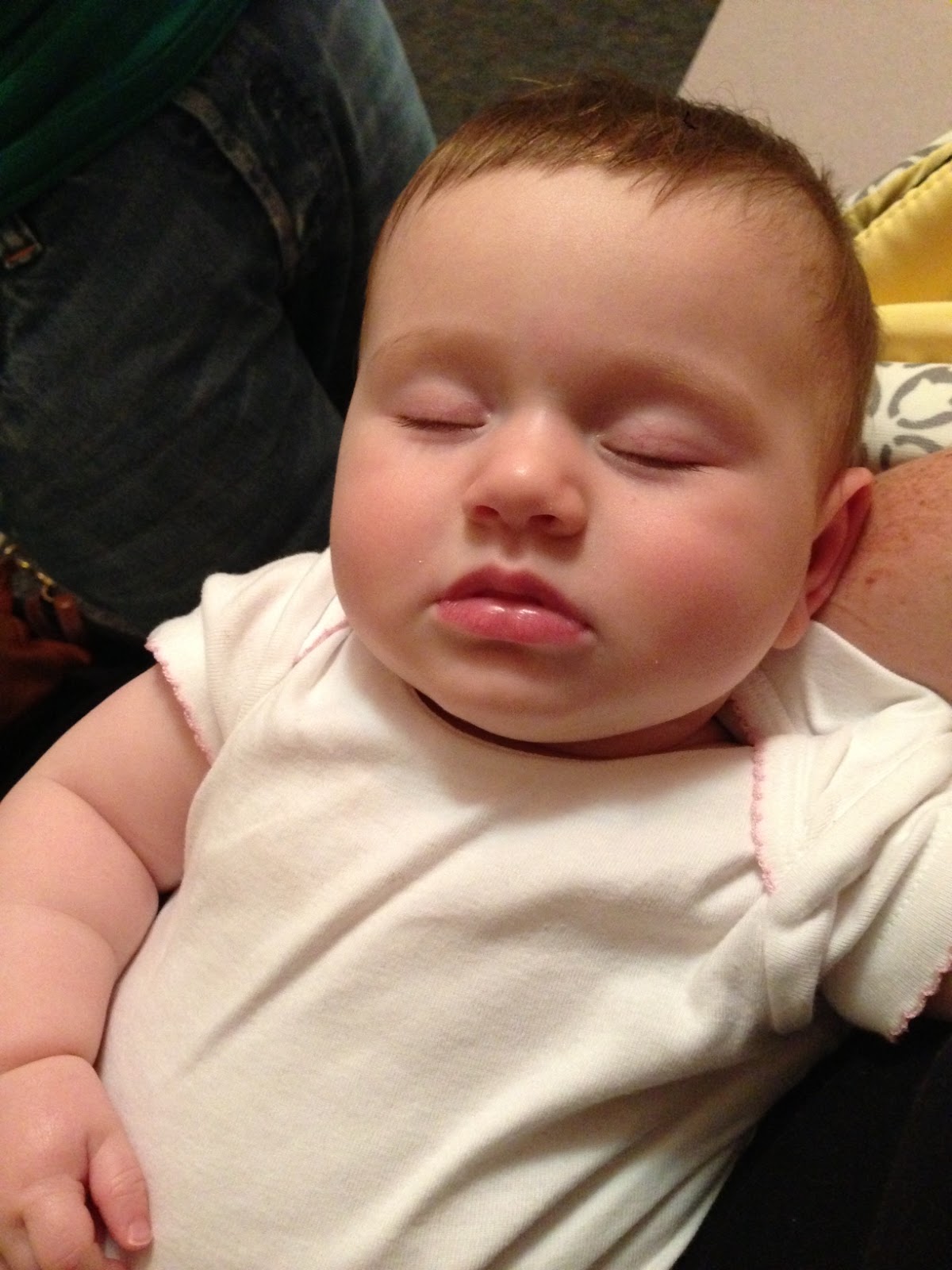 We decided to try selling our house for some silly reason so the poor baby's toys are all put away. We went to a friend's house last weekend and she had a blast playing with all of their baby toys.  My poor child. She gets 1 rattle because we don't want to make the house messy.  We now decided to say, "screw keeping the house clean...a baby needs toys."   Have I mentioned it's really hard to sell a house with a baby and two dogs?


She learned to drive a car. She's very advanced. 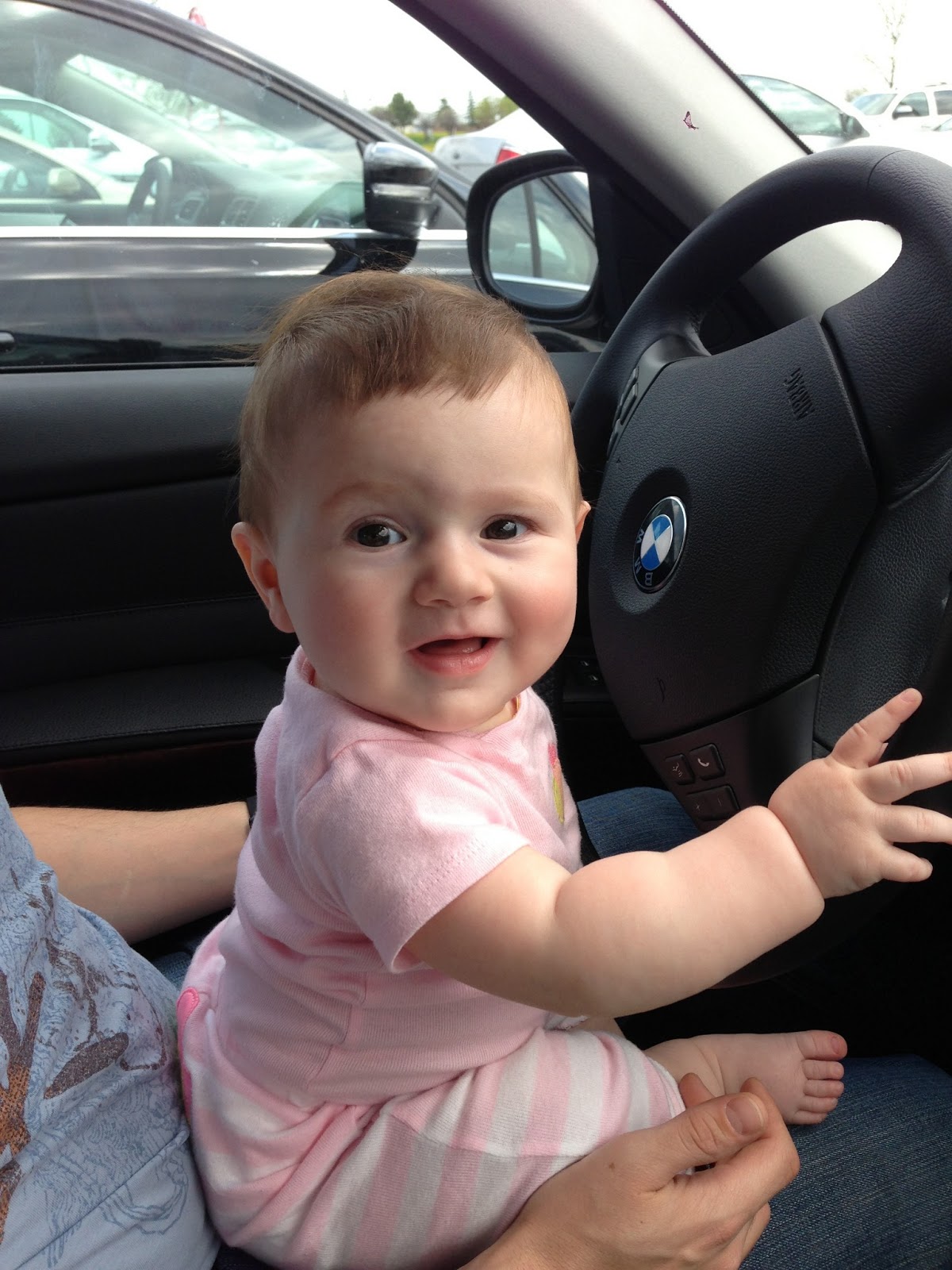 She hates food. Solids are not going well. She literally hates everything. Sometimes we can get her to eat yogurt, but not willingly. She loves her milk, but hates solids. They say this is normal. I'm a Jewish mama, my kid needs to like food. It's a prerequisite. We love to eat. She needs to learn to like food. 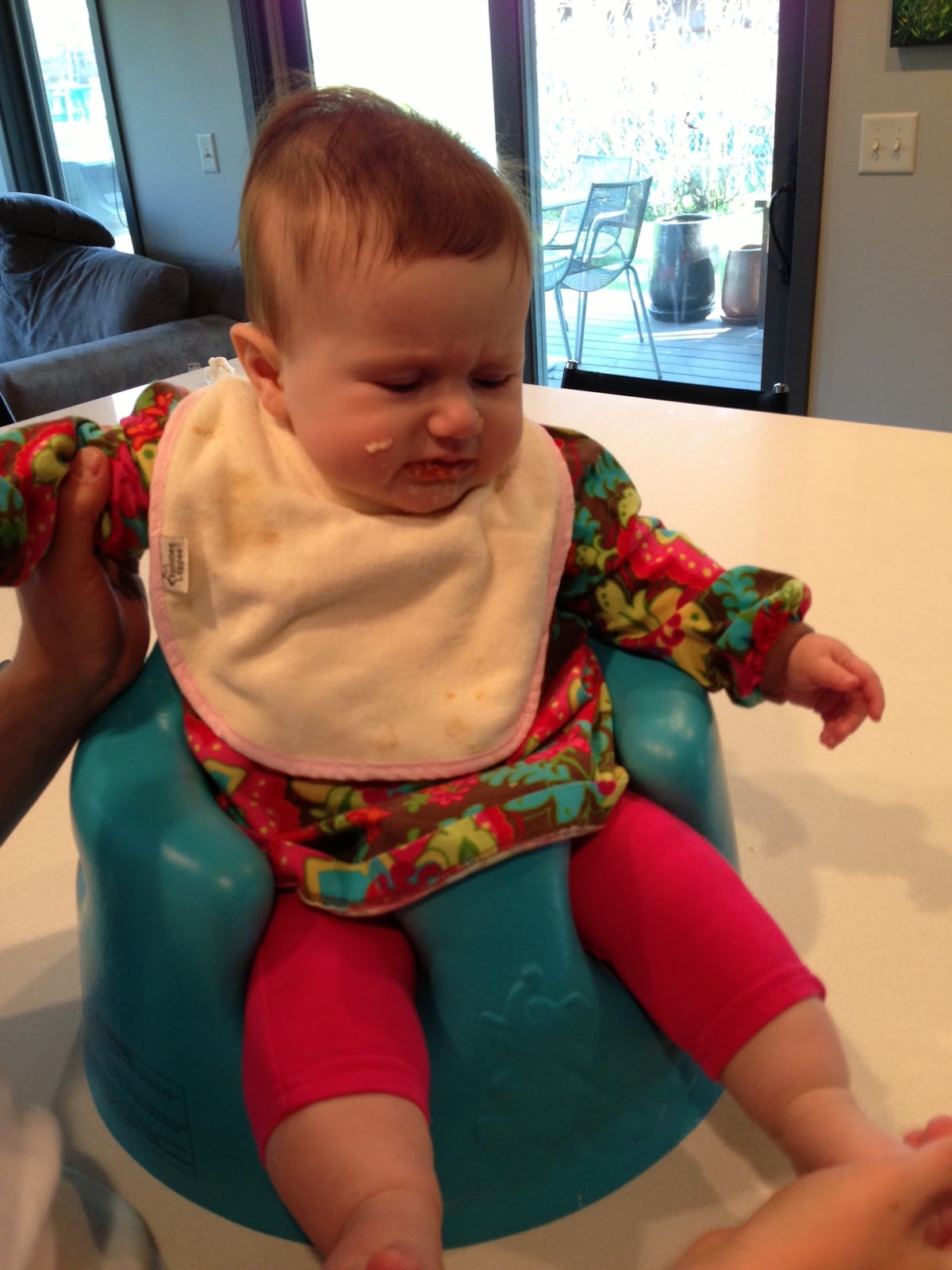 Did I mention she's hilarious and lovable and sweet?

We both work very full time jobs. And we want to spend every possible second with our child. That is difficult. So, we race home from work every night, pick up the baby, and play. We roll on the ground with her, and take her on walks around the lake, sing made up songs and try to get her to say something other than "ba-ba-ba", "ah-be, ah-be" and "da-da-da".   If she can drive, then surely she should be able to form complete sentences... 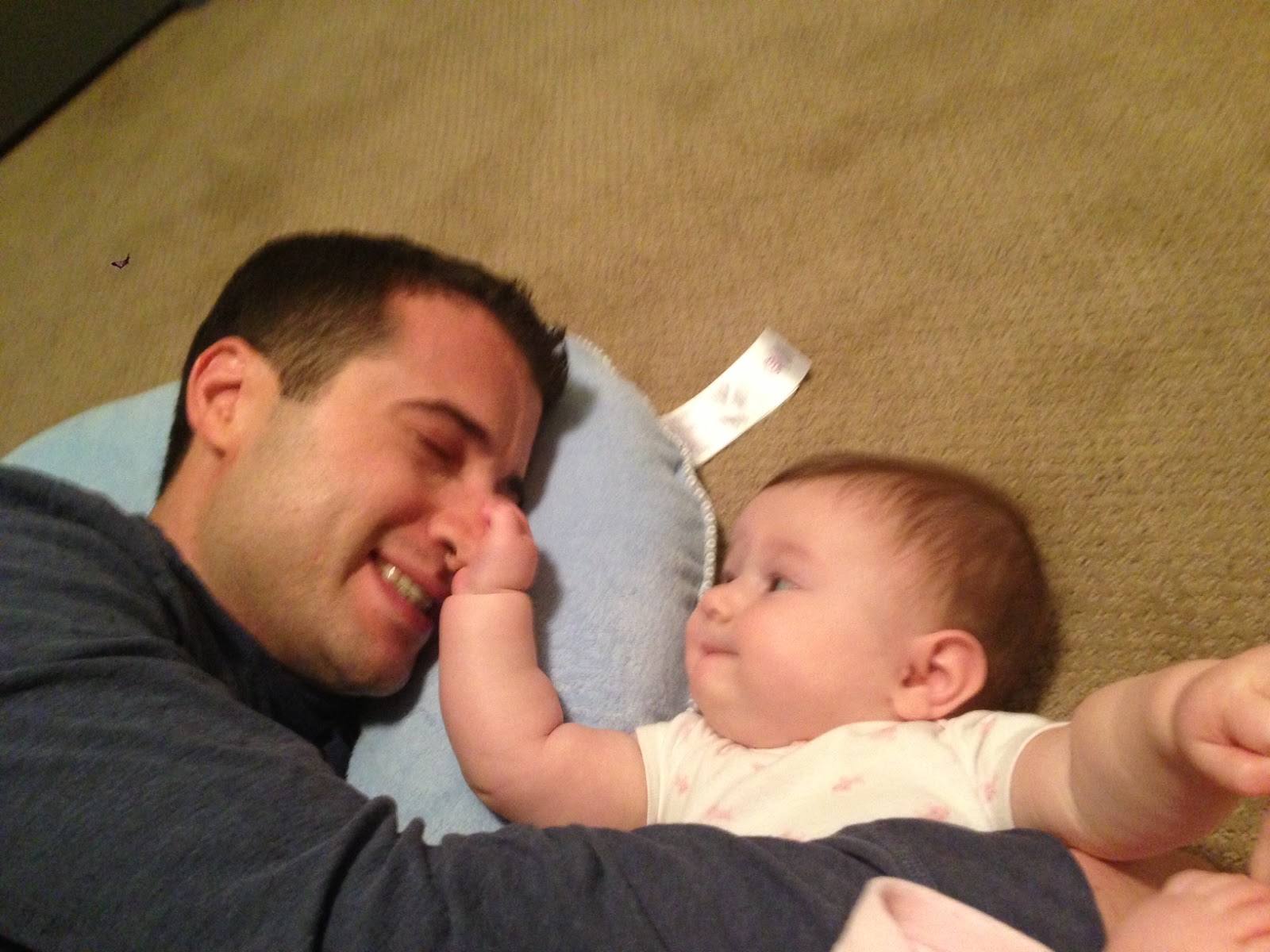 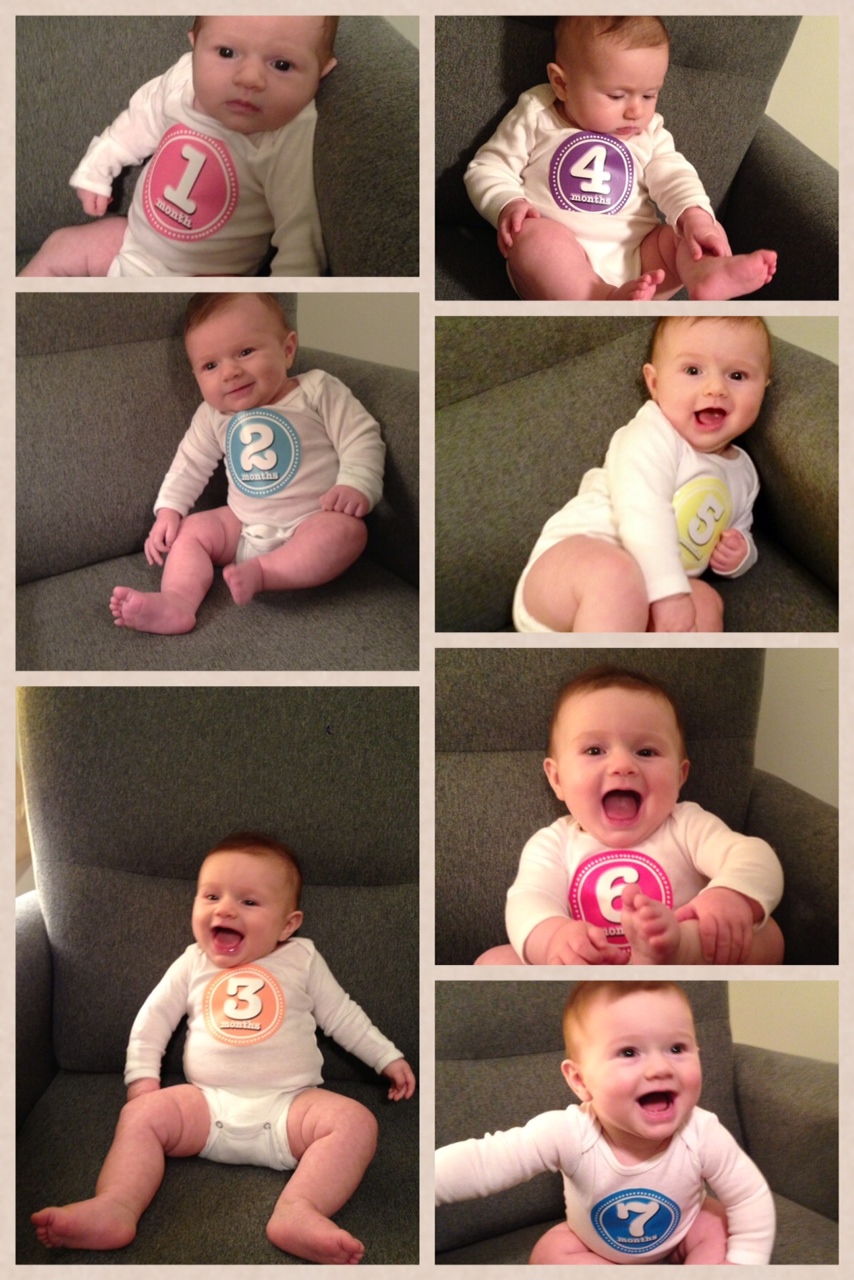 So there it is, life in a nutshell. The good, the bad and the ugly. And sometimes the lines between the good, bad and ugly blur. But at the end of the day, it's all good.
Posted by Kara Frank at 11:01 AM

keep writing! we are here to listen (read?). I hope answers to your Molly questions are found quickly, it is hard to see our babies unhappy. And it is awesome to roll around and see them happy and giggly. You guys are awesome parents! good luck on the house sale...where are you hoping to move?
Love all 3 of you.
Randee

Oh Kara! The Facebook effect indeed. This settles it. Give us a few more days to get our most recent round of cold bugs out of our system (for the most part?), and you guys are coming over to our house to hang out and play - AND rant about how sad it is to constantly be dealing with sick kiddos. I hope Mollie's appointments helped figure some things out, and that she's feeling better - give me a call when you get a minute! I'm off all of next week and am happy to help out with whatever. :o)

I hear ya loud and clear! Hope things get easier and you find some answers soon. Good luck on the house! Can't wait to see what amazing things you do to your next home. Let's grab sushi lunch some day it's sunny. Let me know, even if it's short notice.